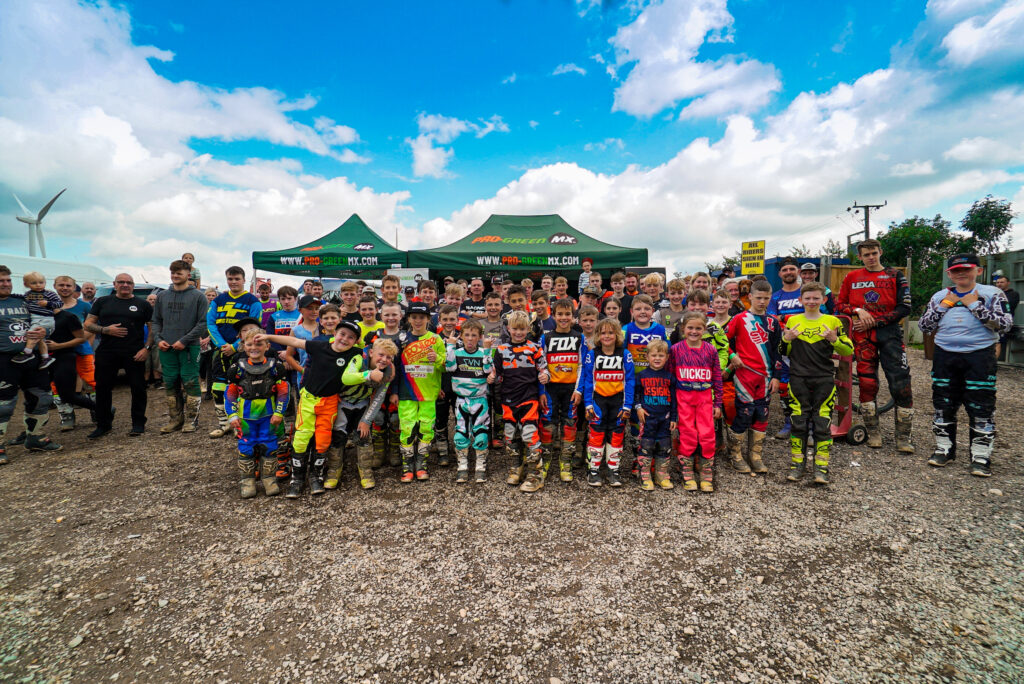 Our first ever Pro-GreenMX Day! …

We’re delighted to say it will not be our last!!

Firstly, we would like to thank everyone who came to our event yesterday, without you the event simply would not have existed!

We completely surpassed every expectation we had for the day and for that we are so grateful!

I think it’s fair to say the team at VIP Motocross prepped a perfect track for you all! A huge thank you goes to Rich & the team for the awesome venue being well maintained, well-staffed & extremely accommodating … so much so that the Pro Whip jump was only built Monday evening!

It was around 9pm when the jump was finished as we were caught in a heavy thunderstorm during preparation … Josh Spinks stuck on his kit and after 2 run ups just went and hit it! 70ft shapes were thrown into the sunset and although Josh thought it was a big gap, he said it would be awesome. 10:30pm comes and Josh calls us to say he thinks he may have made the jump a bit too big! The VIP team were just prepping the track and didn’t leave until 11pm, they came back at 6am to move the jump 10ft forward and to shape it to the jump the Pro’s hit on the day!

Where do we start?

The Whip contest was brought to you by 3 young riders feeling inspired after watching the Pro’s take the stage at Airborne Gunner hosted by SteelHawkMCC at Cusses Gorse just 1 week before our event. So, a huge thank you goes to Harrison Greenough, Olivia Reynolds and Robbie Daly for coming to our stand and begging for us to put one on for them!

Josh Spinks, Dylan Walsh, Stuart Edmonds and Luke Smith all had doubts about the 60ft jump from off the track onto one of the existing landings but being Pro riders … they went for it anyway! What a show!! All 4 riders showed their talents by whipping their machines on their second jump!

Callum Swan, Kathryn Booth, Lewis Bethell, Ashley Mara & late entry Arnis Paberzs were next up for the adult competition. We handed the power over to Jeff Perret & Dave Willet (MX DAD) to judge the next 3 classes.

The battle which took place on a tabletop on the track saw Arnis throw the most stylish shapes on the limiter and Callum, which through either skill or pure luck manage to stick the most sideways landing … The judges couldn’t decide even after another sudden death contest so it was deemed a draw and the prize of £100 and some yet to be launched Pro-GreenMX goodies were split!

85’s were up next … Archie Girdham, Harrison Greenough, Max Harris, Charlie Richmond, Lucy Barker, Chester Hyde and Drew Stock took to the stage. All of these riders were so stylish and have such talent but the contest was clinched by Charlie Richmond after his 3rd and final jump with an out of this world whip! Charlie Won £100, some yet to be launched Pro-GreenMX Goodies & a Blobfish Media T-Shirt!

Finally, we had the 65’s … Olivia Reynolds, Robbie Daly & Alfie Geddes-Green. It took nerves of steel to enter this contest in front of a crown but these 3 absolutely smashed it! Both boys pulling out some stylish sideways whips and Olivia, an 11-year-old freestyle goddess pulling out a ‘nothing’! A nothing is where let go of the bars with your hands and take your feet off the pegs whilst in mid-air, everything your dad, coach and other riders would never dream off telling you to do … especially at 11 years old! … The judges took a moment to decide, and Robbie Daly’s style was too good, he was handed 1st place winning £100, some yet to be launched Pro-GreenMX Goodies & a Blobfish Media T-Shirt!

Huge thanks go to all those who took part, Jeff & Dave for judging, VIP Motocross for managing safe zones & the crowd … everyone who came and cheered the riders on! What an atmosphere!!

We are on an extreme high that our once small brand has managed to build to where it is today. It makes us so proud that you all came and took part wearing our merch, it felt like one big family!

Hope you’re all as excited to see the edit from Blobfish Media as we are!!

And finally … thank you to everyone who attended, came over to the stand, created an amazing atmosphere and most importantly enjoyed their day with us!

Enter your email address to sign up to our newsletter and receive 10% off your first order!

stand out from the crowd 🌟 After-Shine leaves

It really is this easy … our Mixer Sprayer mean

Enter your email address to sign up to our newsletter and receive 10% off your first order!